Bucket of BBQ & Blues, Saturday, Aug. 16, a free concert featuring live bands and food available for purchase at Nature Discovery Park, 2627 Nature Park Drive.
Singer Alonzo Smalls will lend his talents for the performance, which kicks off at 8 p.m. and runs until 10 p.m.
Bring the family, coolers and blankets, but leave the pets at home.

WE GO EVERY YEAR-CAN'T HARLDY WAIT. THEY PASS OUT ALKA-SELTZER AT THE FRONT GATE!! 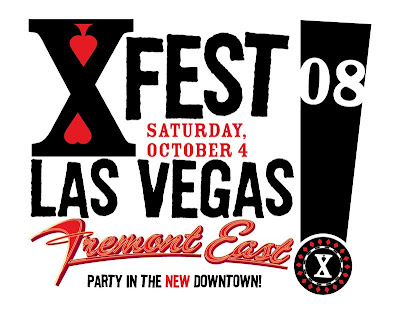 X Fest Las Vegas will be the City of Las Vegas's Largest Downtown Music Festival.
Will be on Saturday, October 4th, 2008 in the newly revitalized Fremont East District.
X Fest is the biggest downtown party you've ever seen. It features the Worlds Largest Outdoor Disco that utilizes four city blocks and 50 bands and performers on 6 separate stages.

The X Fest will draw 15,000 people to downtown
Vegas and will feature some of the best and most popular touring acts in the country. With performances by Buckcherry, Puddle of Mudd, Bullet For My Valentine, Candlebox, Apocalyptica and Trapt.
If you enjoy good times there is no where else in the world to be on October 4th, 2008.
at 8/18/2008
Email ThisBlogThis!Share to TwitterShare to FacebookShare to Pinterest

off the strip.
What's this?