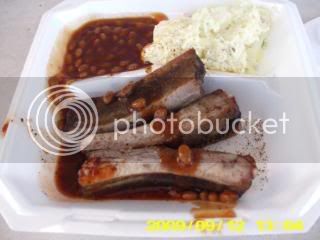 AFTER
Where to begin?!? 1st this is NOT a review of (@redrockharley) Red Rock Harley Davidson but a Review of the BBQ cook-Off and Susie's BBQ!
I arrived Saturday at 1pm and there was already a good crowd of people mostly bikers and most of them hanging out around the front of the store where there was a little shade.
The BBQ was set up in the parking lot -directly in the 110+'SUN with about 16 vendors but ONLY 5-6 BBQ vendors. Most of the otheres were serving kettle corn,funnel cakes,garlic fries,chicken fingers and the like.
SUSIE'S BBQ had the biggest display & lots of trophies so we decided to spend our $$ there.
Prices were pretty stiff!! $8 for 3 ribs & 2 sides was the CHEAPEST thing.
I had beans & potato salad and added some HOT bbq sauce.
While waiting in line a drunken bum came asking for $$ and I politely declined.
There was no picnic tables or seating of any kind set up so everyone had gathered around the window ledges at the front of the store.
I also needed a drink so I got a water FOR $2 at the shaved ice stand. BALLS! $2 for a bottled water at a LOCALS event!! WTF!
Anyways the RIBS SUCKED TOTAL ASS-no beating around the bush here-by far the WORST BBQ I have ever experienced and I love bbq & bbq competitions and you would know if you've visited my blog.
NO smoke ring-COLD-Tough & rubbery,lots of FAT and the sauce wasnt even HOT.
I actually couldn't even get a bite of one!!
The potato salad was warm and the beans were sugary sweet.
You can Look at the pics above and see the times I tried to do it but They were JUST WRONG!!
I was extremely pissed I had just shelled out $10 for Ribs and a drink and IT wasn't even edible.
And to top it all off the drunken bum came back by to harrass us some more.
I wasn't about to spend anymore money I already felt misled about the nature of the event.
A BBQ competition HARDLY! 6 stands!
I'd really like to know who won and who the CELEBRITY judges were!! Also how SUSIE'S BBQ faired!!
at 9/13/2009
Email ThisBlogThis!Share to TwitterShare to FacebookShare to Pinterest

off the strip.
What's this?